If you’re new to the blog or just want to revisit from the beginning, click HERE to read the review for “Tourist Trapped”.

Previously on Gravity Falls:
Dipper and Mabel Pines are sent to Gravity Falls to spend the summer with their Grunkle Stan, who runs a tourist trap called the Mystery Shack. Dipper finds a journal in which the enigmatic Author has chronicled some of the unusual happenings and inhabitants of the town, and he vows to follow in his (or her) footsteps to unravel Gravity Falls’ mysteries while bonding with his wild sister and cranky Grunkle.

So Gravity Falls not only has supernatural occurrences happening on a daily basis, it also has its own popular television series, Ducktective. I’ll give you one guess as to what it’s about.

While Dipper and Mabel are watching it, Soos appears and tells them that while cleaning the Mystery Shack he found a hidden door. They check it out together and find it full of creepy wax figures of famous people including Sherlock Holmes, Ghengis Kahn, Lizzie Borden, Groucho Marx, Coolio, Shakespeare, and more. 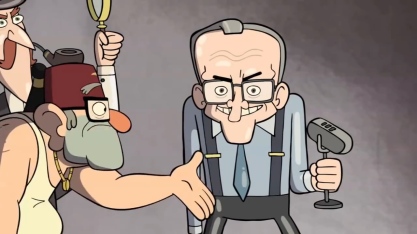 Also some kind of strange goblin man, the Journal says he’s a mythical beast known only as a Larry King. What he’s king of I have no clue.

Then they get startled by a wax figure of Grunkle Stan, which turns out to be the real Stan, which scares them even more.

With the intro out of the way, Grunkle Stan explains that the wax figures used to be part of the Shack’s exhibits, but he put them into retirement when they stopped drawing crowds. Now’s as good a time as any to bring them back, but when Stan discovers Wax Abraham Lincoln has melted (with Wax John Wilkes Booth as the primary culprit) Mabel promises to make a new wax figure for him. She even finds her muse – Stan himself.

Soon the day of the grand re-opening arrives complete with a gala event that promises fun – and no refunds – will be had. The Grunkle Stan wax figure is unveiled and it is an exact likeness (the glitter coating notwithstanding). Stan is interviewed by failing reporter and sad sack Toby Determined, who can only afford a turkey baster to use as a microphone, and serious reporter Shandra Jiminez, who calls Stan out for the lack of free pizza promised on the flyers. Stan ends the conference with a smoke bomb and flees while most of the crowd, especially Manly Dan, takes their anger out on anything in sight.

Stan considers the day a success and he attributes it to his wax doppelganger. He even starts talking to it like a real person, which is…a little weird. He leaves it propped up on the chair in the living room while he goes to the kitchen.

Moments later, Dipper and Mabel hear a scream from downstairs – Wax Stan has been murdered.

END_OF_DOCUMENT_TOKEN_TO_BE_REPLACED

If you’re new to the blog or just want to revisit from the beginning, click HERE to read the review for “Tourist Trapped”.

Previously on Gravity Falls:
Dipper and Mabel Pines are sent to spend the summer with their “Grunkle” Stan in the town of Gravity Falls, where he runs a tourist trap called The Mystery Shack. Dipper uncovers a journal in the woods detailing some the strange and mysterious happenings in Gravity Falls while Mabel finds love with a teenager named Norman, who turns out to be a bunch of gnomes piled on top of each other. After defeating the gnomes’ plot to kidnap Mabel and make her their queen, she and Dipper reaffirm their awkward sibling love and he vows to uncover more of Gravity Falls’ mysteries.

And now, Episode 2, “Legend of the Gobblewonker”.

Dipper and Mabel are enjoying breakfast when Dipper spies a magazine ad offering one thousand dollars to anyone who can get a picture of a monster. Since Gravity Falls is full of weird creatures (and they unfortunately didn’t take any photos of those gnomes from before) they’ll have no trouble finding any. Grunkle Stan shows up however and informs them that it’s “family bonding” day. The twins aren’t thrilled with this considering the last “family bonding” time they had with Stan. 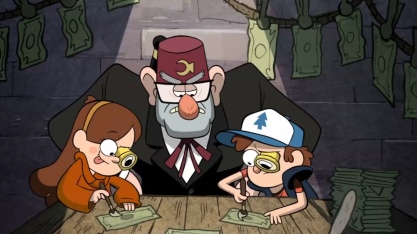 And if you think that’s fun, just wait until they visit the county jail!

After the intro, they arrive at the lake where Stan surprises them with their activity – he’s taking them fishing! It’s the first day of fishing season and most of the town is already out with their hooks, frying pans and other assorted lures. Dipper questions why Stan wants to do a real bonding activity and he admits that since he has no one else seems to “like or trust” him, they’re the only people he’s got. He’s even made them personalized fishing hats to wear while they spend all day in the sun with him and a book full of bad uncle jokes. Not surprisingly, Dipper and Mabel quickly try to find a way out of this.

The answer comes immediately in the form of Gravity Falls’ resident crackpot hillbilly, Old Man McGucket (Alex Hirsch). He runs among the townsfolk raving about seeing the local legendary lake monster, a Loch Ness-type creature called the Gobblewonker. Nobody believes him, not even his own son, even when he shows them the remains of his boat after the monster apparently wrecked it.

Dipper is the only one who believes him, and convinces Mabel that if they can snap a photo of the Gobblewonker, they can share the reward fifty-fifty. Mabel’s mind races with the possibilities of having $500 at her disposal.

They see me rolling, they hating…

END_OF_DOCUMENT_TOKEN_TO_BE_REPLACED

Greetings fellow readers and seekers of the unknown, welcome to Gravity Falls! In the heart of Oregon lies a small town where everything is not as it seems and mysteries lie around every corner. The first of what I hope are many successful animated shows created by Alex Hirsch, Gravity Falls takes place over the course of one very eventful summer following the adventures of characters that have gone on to become some of my all-time favorites and some of the best writing I’ve seen on tv in ages, let alone from the Disney Channel. I can’t guarantee these reviews all happening in such a short amount of time as the Pines’ journey into the unknown (especially how there’s only one month of summer left) but the release schedule for each episode I’ll be looking at will be most assuredly better than the one for the show itself. I’m not exaggerating, months would go by between each new airing, a frustrating mixture of bad scheduling by the network (“Meh, that animated fluff those basement dwellers seem to love can wait, but God forbid the kids miss any chance to watch Dog With a Blog!!”) and the insane amount of time it makes to create an episode (it took a year to the day to get it from script completion to air time). Lucky you, you won’t have to wait as long like most of us fans did. They’ll be out every couple of weeks, once a month at the most. Also, while I’ve enjoyed individual episodes from time to time after the series finale, this will be my first time watching the entire show from start to finish in one go, so forgive me if I fangasm a bit at some points. Then again, seeing as how this beat out some classic British sci-fi, technicolor ponies, singing knights, and Harry Freaking Potter among others, it’s easy to see that I’m not alone in feeling this way. But enough of my overly long introduction, let’s get started with Gravity Falls’ first episode, “Tourist Trapped”.

We open on a happy summer scene of families having a barbecue and playing in the great outdoors…and then a golf cart driven by two screaming children crashes through a billboard while pursued by some huge unseen creature.

Right off the bat we’re shown that this isn’t going to be your average animated Disney show. It’s a perfect intro to what we’re about to dive into.

…until the actual intro starts. Everybody whistle along!

By the way, if you’re wondering why the animation on Dipper and Mabel seem so fluid, it’s not just the budget going towards the intro like so many cartoons in the 80’s did. They were animated here by legendary Disney animator (and Adventure Time horse) James Baxter.

No, seriously, James Baxter also animated and voiced that horse from Adventure Time that shares his namesake. Weird semi-related fact for you.

After that, we rewind a bit to where it all began – meet Dipper and Mabel Pines (Jason Ritter and Kristen Schall respectively), 12 year-old twin siblings who get sent by their forever-unseen parents to Gravity Falls, Oregon to spend their summer with their great-uncle, “Grunkle” Stan (Alex Hirsch). Stan runs a tourist trap called the Mystery Shack, where he tricks the local rubes and unwary vacationers into handing over their cash with cheap displays of fake creatures and cheesy jokes that even the Jungle Cruise skippers wish they thought of. He also employs the kids to help him run the gift shop (ask Stan if he knows anything about child labor laws and he’ll find some way to either distract or bribe you, that’s the kind of boss he is). Also working at the Mystery Shack are Soos, the handyman (also Alex Hirsch) and cool as ice teenager Wendy Corduroy (Linda Cardellini). I’ll get more into them as the series progresses and why they’re great characters, but this episode does a decent job setting them up with what little screentime they’re given.

Mabel, the more outgoing of the twins, has no trouble finding something fun to do, whether it’s rolling in the grass or making friends with the goat who lives in their attic bedroom. Dipper on the other hand is less thrilled being stuck in the middle of nowhere for three months. The town seems to be hiding something, he frequently falls victim to Grunkle Stan’s pranks and he’s always the one who’s picked to do the hard jobs around the Shack. Speaking of, one particular evening Stan sends him to put up some Mystery Shack ads in the woods. Dipper is understandably reluctant, as not only are those woods creepy but his mosquito bites seem to be giving him a warning… 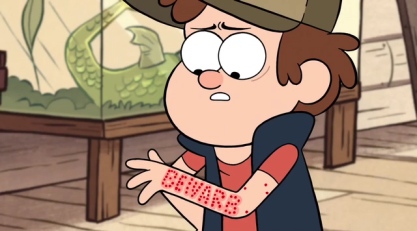 That’s nothing, I’ve got eczema on the back of my knee that’s given me the answers to every math test I’ve taken in high school.

While out in the forest, Dipper tries to hammer a nail into a tree only to find that it’s made of metal and hollow. He discovers a hatch with some switches inside and after playing around with them, a hole pops open in the ground to reveal a dusty old book with the image of a six-fingered hand marked with a 3 on its cover. 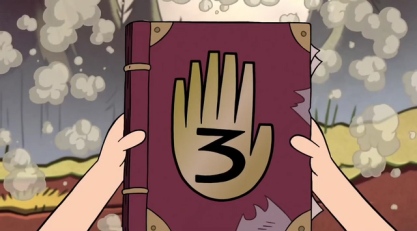 Dipper reads the book, a journal with the owner’s name ripped out. Inside are countless notes and illustrations on the strange occurrences and creatures within the boundaries of Gravity Falls. As he reaches the journal’s last entries, the writings become more frantic and messy, ending with the author’s fears that he (or she) is being watched and one last warning that in Gravity Falls, there is no one you can trust. From there the Journal is completely blank…