I ended my last Gravity Falls review by pointing out a whole year passed between Season One’s finale and Season Two’s premiere. That gave plans plenty of time to form their own theories on the Falls’ biggest mysteries and lament the prolonged lack of new episodes. They weren’t completely starved for new content, however. During that long hiatus, Alex Hirsch and the Gravity Falls team produced a series of interstitial shorts for the Disney Channel and online. These vlog-style shorts provide equal doses of humor, mystery and charm in only a few short minutes. Also, keeping with Hirsch’s stellar continuity record, select things from the shorts either make appearances or play an integral role in future episodes. This is the reason why I’ll be looking at them in the weeks leading up to the return of full episode reviews. It won’t be your average in-depth review with call back and hilarity categories, just a minor retrospective with my thoughts. Let’s begin, shall we?

END_OF_DOCUMENT_TOKEN_TO_BE_REPLACED 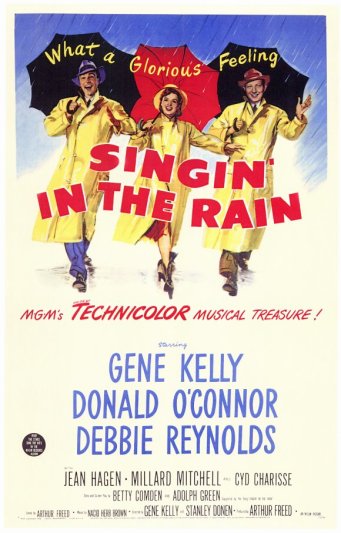 Considered by critics, historians and movie buffs alike to be the greatest musical ever made.

Seriously, what are you still doing here reading my ramblings? You’re better off spending the next hour and forty-two minutes watching the film yourself.

…well, you came this far, didn’t you?

I’d hate to hype up this movie too much since it already has such a lofty reputation, but I can swear a solemn oath that its reputation is one that it has well and truly earned. I count my first viewing as one of those times where I looked at a classic film and said “Yeah, bring it on,” but minutes later was completely hooked.

It all began when Arthur Freed, famed musical producer for MGM, tasked songwriters Betty Comden and Adolph Green to create a film using only well-established tunes from previous MGM musicals to show off their catalogue of hit songs.

In other words, the Greatest Movie Musical of All Time is in fact a jukebox musical.

So why is it that this movie gets all the praise (which it deserves, might I add) while films like Mamma Mia…don’t? Well for one thing, they put time and effort into crafting the story and how the songs play into it. They don’t use the elaborate musical numbers as a distraction from a wafer-thin plot or characters like some other movies I could mention.

Second, all the songs featured have become standards for a reason. Each one is an ear worm from start to finish. Though they’ve been featured in other movies, how they’re utilized here all but eclipsed their previous incarnations.

Third, it is funny. And I mean laugh-out-loud, every-line-hits-its-mark, future-screenwriters-please-watch-this-to-learn-how-to-write-good-crack-up-dialogue funny.

I have…mixed feelings when it comes to Gene Kelly and his works. Have you ever seen a movie that blew you away so much that any in the same anthology or of a similar caliber simply, for whatever reason, failed to match the same experience you had before? I’ve had that happen to me twice – once when I tried to watch the other Mad Max movies after seeing Fury Road, and again with most of Kelly’s films after Singin’ in the Rain. Kelly was an incredible dancer and choreographer; some might even say he was to dance on film the way Walt Disney was to animation. Talent and praise can go to your head if left unchecked however, and Kelly LOVED to show off his moves, even at the expense of the story. If you ever decide to play a drinking game when watching one of his movies, don’t drink whenever he stops the film just so he can dance. You won’t make to the end credits. Don’t get me wrong, I adore musicals and a good dance break is always welcome if it’s entertaining enough, but Gene indulges himself one too many times even for me. Also, if you know anything about him behind the scenes, the horror stories are sadly true. The man wasn’t a perfectionist, he was a full-blown diva. Both cast and crew lived in fear of his tantrums should one step fall out of place. Singin’ in the Rain is no exception to either of these truths, but one, you couldn’t tell by the great chemistry on screen, and two, with the exception of one or two moments, the dancing is so well integrated in the narrative that to cut any of it would be a detriment to the film. There are moments that left me slackjawed at how fluid and lively the choreography is. I can’t recall any other musical that has left me the same way regarding to that aspect.

Well, enough of my buildup, let’s look at that silver screen classic, Singin’ in the Rain.

END_OF_DOCUMENT_TOKEN_TO_BE_REPLACED

Pardon me if I’m not entirely enthusiastic today. Apparently someone thought it was a good idea to tweet my thoughts on the Indians from last month’s review of Peter Pan to Donald Trump, and now he’s been bugging me for the past few weeks to join his cabinet. As such, I’ve been lying low somewhere that neither a millenial or one of his supporters would think to tread.

“I’m guessing either a library or a mosque.” 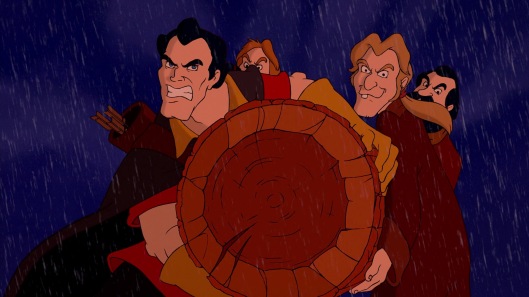 “Wherever Cynicism goes, we’re usually not far behind. That’s the power of the internet for you.”

And let me guess, you’re going to call me out on my opinions too?

“No! We’re here to stop you from accepting the position! We don’t need any more vile self-serving racists in the government than we do now!”

I DON’T EVEN WANT THE STINKING JOB!!

“But we’ve already circulated several petitions around the internet that are amassing signatures as we speak.”

Can’t you all just leave me in peace to announce this month’s review?

“All right, but as long as it’s not something controversial.”

Thank you. And now, your review for the month of May is…