Happy Holidays everyone! That’s right, as a present to you all for sticking around for so long without consistent movie reviews, I’m bringing back mini Christmas reviews for the month of December. Once a week leading up to December 25th I’ll be sharing thoughts on some of my favorite shorts, specials and TV episodes that center around the most joyful time of the year.

Speaking of stories, sometimes the best ones can come from personal, even uncomfortable places. Mike Scully, longtime Simpsons writer who was behind the episode we’ll be looking at today, was once pressured as a boy to engage in some shoplifting and was caught almost immediately. The experience traumatized him, but as he jokingly told Variety in an interview, “It’s great to be paid for reliving the horrors of your life.” “Marge Be Not Proud” could have been an episode that wouldn’t feel out of the ordinary if it took place on any given day, but the fact that Scully decided to have it happen around Christmas gives it some extra weight both in context of the plot and in real life. This was the first Simpsons Christmas episode since “Simpsons Roasting on an Open Fire”, exactly six years ago to the day. Let’s see if it lives up to that one’s standards.

Bart and Lisa are watching a cheap Krusty the Clown Christmas special when a commercial comes on for the hottest new video game, Bone Storm. It’s done in the typical 90’s fashion that I’m all too familiar with – a couple of kids are bored with the totally lame games they have when a muscular gun-toting Santa crashes through the wall and demands they play this hot new ultraviolent game.

Bart is immediately hooked and does exactly what the commercial tells him: ask his parents to buy him Bone Storm or go to hell. Marge is appalled but Homer’s reaction is the best; “Young man, in this house we use a little word called ‘please’”. I keep thinking he expected Bart to leave his demand unchanged but having a please at the end would make it okay. Typical Homer moment. Marge refuses to buy it for him as A) it’s expensive, and B) it’s another Mortal Kombat knockoff meaning she’d rather let her kids sit through Itchy and Scratchy than be subjected to that level of violence. Bart isn’t happy with the decision, and is frustrated further when she subjects him to a saccharine lullaby and rote motherly advice when she tucks him in that night.

Bart gets his hopes up when The Android’s Dungeon advertises Bone Storm for 99 cents, but Comic Book Guy dashes them by saying that’s the rental price and all the copies are out, though there is an abundance of Lee Carvallo’s Putting Challenge if he wishes to better his golfing techniques. Bart heads over to his dweeby friend Millhouse’s…house and finds that he has the game. Millhouse refuses to share however and gets his mom to kick Bart out by saying he’s been swearing. Desperate, Bart goes to the local Try-N-Save and puts on a sad face in the video game aisle, thinking someone will feel bad for him and buy him Bone Storm for Christmas. That too fails, as the only customers are a mom and her ungrateful yuppie larvae.

The store employee forgets to lock up the case of video games, leaving it wide open for Bart. Local bullies Nelson Muntz and Jimbo Jones approach him and proudly show off what they’ve been shoplifting. They convince Bart there’s nothing wrong with doing it if you don’t get caught. Bart wrestles with his conscience, which takes the form of a number of video game characters that also tell him to take the game, (and also Lee Carvallo who says not to) and Bart gives in to his temptation. He makes it outside the store but stalls too long to congratulate himself and gets dragged back inside by the store detective Don Bradka (guest star Lawrence Tierney). I’m not too familiar with Tierney’s work, but the tough guy persona he portrayed on screen and real life according to Wikipedia certainly shines through in this character. He’s the head of security that takes his job way too seriously and the way his growled warnings of “Capiche?” bounce off the terrified and naïve Bart make for some good laughs.

After subjecting Bart to a few minutes of Troy McClure’s anti-shoplifting video (God bless you, Phil Hartman) Bradka calls his house and tells his parents that he was caught stealing. Thankfully they’re not home and he leaves a message. He lets him go, but warns him not to return to the store or he’ll be spending Christmas in juvie. Bart sprints home as fast as he can to switch the tape and it literally becomes a race against his parents as they’re in a hurry to change Maggie’s diaper. Homer listens to the answering machine on arriving and is confused as to why there’s a recording of Allan Sherman’s “Hello Muddah, Hello Faddah” playing (“Marge, is Lisa at Camp Grenada?”) Bart is feeling just swell the next morning, until Marge tells him they’re going to the Try-N-Save to take the annual family Christmas photo.

Bart does everything in his power to make sure he won’t be recognized despite Marge’s pleas for him to not mess around with the picture this year. After some close calls, they make it to the photo booth only for Bradka to yank Bart out of the frame just as the camera flashes. 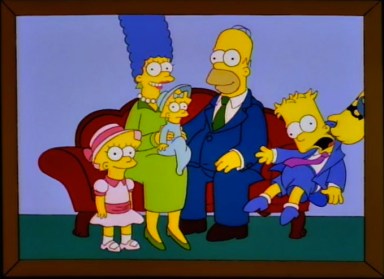 Bradka chews out Bart but Marge stands up for him, saying that despite his attitude he’d never to stoop to something so low as shoplifting. The detective readies the security footage of Bart taking the game to prove her wrong. Bart finally decides comes clean, but it’s too late. The tape plays, and because the TVs in that store are hooked up to play the same thing, every single one shows Bart’s crime for the entire town – and Marge – to see.

Homer yells at Bart for a bit once they’re home, but Marge is uncharacteristically quiet. When Bart tries to apologize, she asks him to go to bed. No shouting, no change of expression. Bart thinks he’s off the hook, but Lisa says she knows their mother. She doesn’t rant and rave like Homer does when she’s upset, and she’s not going to let go of something like this like it’s no big deal.

While Maggie and Lisa get good night kisses and a song when it’s tuck-in time, Bart gets a curt “Good night” from the door. Marge wonders before going to bed just where she went wrong. Note that she didn’t say Bart, she said HER. She begins to think that maybe she smothered him too much, that her constant affection made him lash out this way. “I always thought I understood my special little guy, but somewhere along the road his hand slipped away from mine. He’s not my little baby anymore,” she says wistfully while looking at an imprint of his hand at age four.

The next day Bart comes down to breakfast alone since Marge didn’t wake him. She didn’t even give him any marshmallows for his hot chocolate, since she believed he was old enough to do it on his own. Bart visits Milhouse and asks if he ever worries that his mom will stop loving him. Milhouse is more focused on playing with a toy ball-and-cup. He even lets Bart play Bone Storm to prove how over the video game he is. He and Bart fight over the toy until Milhouse tells his mom that Bart’s smoking. Before she can escort him out, Bart asks if he can help her with any mother-type chores around the house. What follows is a somewhat sweet if awkward scene where they write out envelopes for Christmas cards together and Bart keeps asking who they’re going out to.

On his way home Bart hears Marge laughing and is overjoyed to hear her happy again. He finds that she, Homer, Lisa and Maggie have been building a snowman family without him since Marge thought he was too old to enjoy such an activity. When they go inside Bart tries to build his own snowman with dirty snow from under the car and it’s adorably pathetic. Nelson passes by and gloats about getting away with another shoplifting spree. That’s the last straw. Bart is tired of being cast as the black sheep, and he heads back to Try-N-Save to prove what a black sheep is capable of.

Marge and Lisa are decorating the tree when Bart sneaks in. Marge catches him hiding something in his jacket. Her trust completely broken, she chases him throughout the house demanding he hand it over. Cornered, Bart complies. 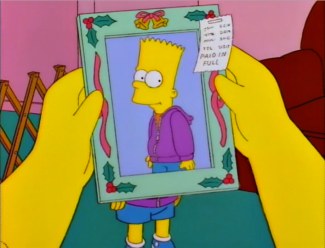 Marge and Bart tearfully reconcile and Marge adds the picture to the family portrait. In a lovely bit of symbolism, the photo was hung crookedly on the wall after it was taken. With Bart put back in, it’s set right. 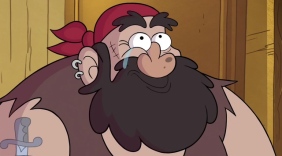 Marge decides to give Bart his Christmas present early since it’s only fair, and it’s the one gift any boy could want – Lee Carvallo’s Putting Challenge.

As much as I love “Simpsons Roasting on an Open Fire”, “Marge Be Not Proud” takes the cake in terms of holiday episodes. By Season 7 the Simpsons style had matured to the point where we get an abundance of visual gags, wry humor and expressive animation, but not so much that it overpowers the themes and central message. Out of all the episodes that centers around Bart and Marge’s relationship, this is arguably the best. Bart’s desire for independence and to be treated as an adult is relatable, but the tragic irony is that Marge gives it to him only when he realizes that he’ll always need her love. I think the fact that we see Bart actually playing the boring game she bought for him over the end credits does count towards something, even if it’s played off as a joke to close the episode on. I do wish the bullies were met with some kind of comeuppance since they never get punished for their shoplifting, but I like to think that on Bart’s solo return to Try-N-Save he ratted them out to Bradka and let the rest take care of itself.

Are there any particular family members you feel especially close to during the holidays? Is there a tradition between you and them that you always look forward to? Feel free to share them in the comments. See you next week when I look at another holiday special from another series starring a yellow character that the network has kept on air much longer than it should have.

I actually started writing this way back in last December but never got around to finishing it before Christmas. Glad I could finally share it now!

1 thought on “Christmas Reviews: “Marge Be Not Proud””

Follow Up On The Shelf on WordPress.com
Xmas Review Votes Due:November 25, 2021