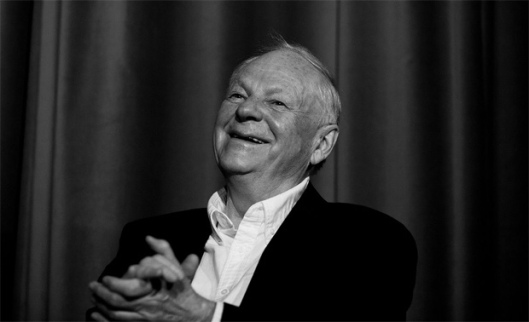 Richard Williams, one of the last great geniuses of traditional animation, has passed away. It should come as no surprise considering his age, but it does little to diminish this loss.

Williams was a man who lived and breathed animation. He studied and practiced the craft with a dedication that’s rare nowadays, and it shows in his work. The title sequences he created for What’s New Pussycat, A Funny Thing Happened On The Way to the Forum, the original Casino Royale, and two of the Pink Panther movies were not only among those films’ highlights but in some cases praised as the very best parts. His book, The Animator’s Survival Kit, is a must-read for anyone who’s studying animation and has yet to go out of print. His very first short, The Little Island, won a BAFTA, and that trophy was quickly joined by a Best Animated Short Oscar for A Christmas Carol, an Emmy for the Christmas special Ziggy’s Gift, and a Best Special Effects and honorary Oscar for a little movie you might have heard of called Who Framed Roger Rabbit.

…And he was also quite possibly off his rocker.

Why do I say this? Well, Williams has gone on record stating that he didn’t like using storyboards in the animation process, which is like trying to build a building without drawing up some blueprints first. Animation, like architecture, is something that can’t be done on the fly. Everything must be planned out, and if you just go ahead with it only to find something doesn’t work and needs to be scrapped and redone, then you’ve wasted a whole lot of time and money and made the task of meeting your deadline much more difficult for yourself.

In case you haven’t guessed, yes, I am referring to his unfinished masterwork, The Thief and the Cobbler. Williams spent thirty-one years creating his movie, which is longer than I have spent being alive. During that time many animators were either fired for not meeting his impossible standards or died of old age. The film was only “completed” at the behest of Warner Brothers and then Miramax, who outsourced the unfinished parts to cheap animation studios and shoehorned a bunch of celebrity voice actors and songs to try to market it as a Disney Renaissance-style musical. Thankfully in the mid-2000’s, a dedicated fan named Garrett Gilchrist assembled a “recobbled cut” of the feature using an assortment of workprints and rare footage, which is the closest thing we have to seeing Williams’ original vision play out.

Now The Thief and the Cobbler is hailed as the greatest animated movie never made, though I wouldn’t call it perfect. The characters aren’t exactly Shakespearean and not much drives the story. But when the animation cuts loose? Just…DAYUM.

Williams was mentored by Milt Kahl, one of Disney’s Nine Old Men and an easy contender for the studio’s best animator. Remember, this is the man who could realistically animate Shere Kahn after watching only fifteen minutes of tiger reference footage. Like the best of Kahl’s repertoire, William’s animation is infused with such lifelike fluidity that not even the most advanced computer animation could replicate it. His last work, “Prologue”, is so astounding that it’s easy to accuse Williams of rotoscoping the entire thing.

Prologue was supposed to be the opening minutes of Williams’ next project, an full-length animated retelling of the Greek epic Lysistrata. It pains me that we’ll never get to see it. And yet, six minutes is better than nothing at all.

I could go on and on about the impact he’s made and list even more of his work from IMDB, but the main reason why I wanted to honor Williams’ memory is because I was very fortunate to meet him in person.

Several years ago the Museum of Modern Art hosted an interview and Q&A of Williams by John Canemaker followed by a screening of the Recobbled Cut of The Thief and the Cobbler. It fell on the same day I was supposed to attend a Weird Al Yankovic concert at Radio City, and looking back on it even before the news dropped, I knew I made the right choice. It was a once in a lifetime retrospective of a fascinating man, his inexplicable, incredible animated resume, and a rare glimpse into how he worked.

Williams didn’t stick around for the Thief and the Cobbler screening; considering the bad memories he had trying to get the darn thing done, I don’t entirely blame him. But in between the Q&A and the film, I managed to quickly tell him how Who Framed Roger Rabbit was the first movie I recall seeing, how it influenced my love for animation and desire to be in the field, and asked if he could sign my dvd copy, which he gladly did. Not only that but I’ve held on to the very Sharpie he used as well.

While I unfortunately can’t drop everything to write a review of Who Framed Roger Rabbit to honor his memory, I’ve added both The Thief And The Cobbler and Raggedy Ann & Andy: A Musical Adventure to The Shelf. All three films are ripe for reviewing if only for the amazing artistry on display.

Rest In Peace, Richard Williams. May flights of delicately pencilled-in angels draw you to your rest.

Follow Up On The Shelf on WordPress.com
April Movie Review Vote DeadlineMarch 30, 2020