adaptation, based on, book, book tag, book to film, cinema, film, film of the book, movie 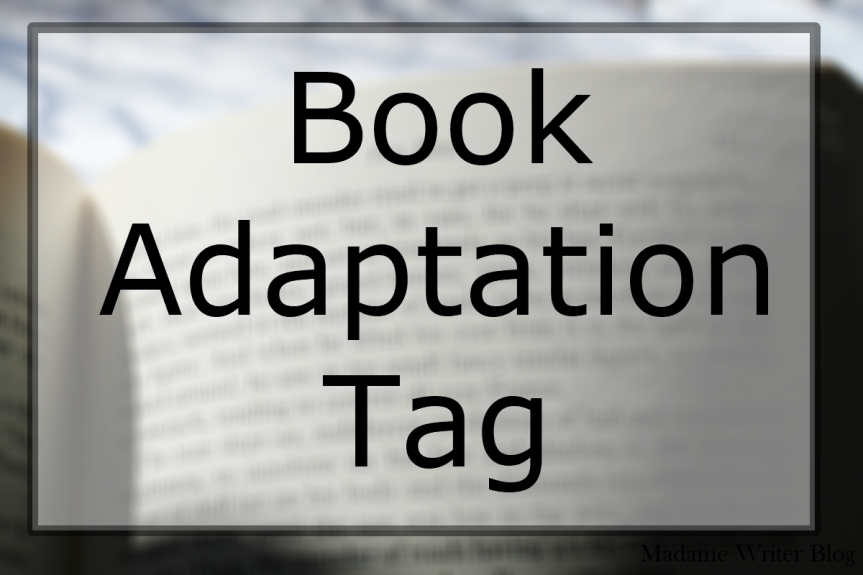 It’s National Reading Month, so why not share some of my thoughts on book-to-film adaptations? 18 Cinema Lane did a fun book related tag in her blog (go check it out, she’s got some good reviews on there), so I decided to give it a try too. Just so we’re clear, these are all my own opinions, and if you disagree with me you’re not in the wrong. Let’s get started!

1. What is the last book adaptation you saw?

Gone With The Wind. Classic movie with great acting and gorgeous visuals, but that racism and nostalgia for pre-Civil War Old South is almost unbearably cringy.

2. What book movie are you most excited for?

Good Omens. Yes I know it’s a miniseries and not a movie but I love me some Neil Gaiman and I adore the casting. Plus, if you binge watch it, it’s basically a long movie with credits between each part! Doesn’t that count for something?

3. Which upcoming book movie will you definitely NOT see?

If it’s got Nicholas Sparks’ name in the title, it’s not getting my money.

4. Which book movie would you NEVER watch again?

Ella Enchanted. They took one of my favorite books and completely wrecked it in order to make a watered-down Shrek clone. Not even Hitchhiker’s Guide to the Galaxy botched their own plot and characters this badly (yeah, I said it, come at me). The only good thing to come from this movie is Anne Hathaway’s cover of Somebody to Love, and thankfully you can listen to that on its own without having to watch this stinker.

5. Is there a movie you saw that made you want to read the book, if you hadn’t yet?

Coraline, and The Last Unicorn. Both are proof that you can make successful animated adaptations of classic stories. I also caught bits of Can You Ever Forgive me on the flight home from Argentina and now I want to read the book it’s based on as well.

6. Conversely, is there a movie that made you never want to read the book?

A controversial one, but the Lord of the Rings trilogy. I’ve said it before in my Unexpected Journey review but Tolkien’s writing in The Hobbit focuses way too hard on the minutiae of world building that it gets dull pretty quickly. Peter Jackson’s movies on the other hand are so well made that I never want to relive the stories with a heaping dose of doorstopper exposition and superfluous characters attached (lookin’ at you, Tom Bombadil).

7. Name an adaptation that has almost nothing to do with the book it’s supposedly based on.

Most any adaptation of The Jungle Book I found has little do to with Rudyard Kipling’s novel. The 2016 Jon Favreau one was closer in spirit than the ones what came before it, but it was still a loose remake of the animated one.

8. Have you ever left the theater during a movie adaptation because it was so bad?

No, I normally don’t leave the theater during a movie.

9. Do you prefer to watch the movie first or read the book first?

Depends on the book/movie, I suppose. It usually comes down to whether or not I want to make comparisons as I’m watching the movie or if I just want to sit back and enjoy it. Or if I have time to read the book in the first place.

10. How do you feel about movie adaptations that age characters up? (ex. characters that are in middle-school, but in the movies they’re all 18)

Annoyed, because it shows the studio doesn’t have faith in the younger demographic and want to pander to the safer, older crowd. Do they really believe they can’t get good actors who haven’t hit puberty yet? Granted they are hard to come by, but it’s not impossible.

11. Do you get angry when the actors don’t look like how you thought the characters should have looked?

Not really, no, unless they try to make them too pretty. Heaven forbid we get some diversity in our features!

12. Is there a movie you liked better than its book?

If it’s Disney and it’s based on a fairytale, you can bet that I probably like it more than its literary origins (with the exception of Frozen, but the sequel looks like it’s headed towards a good place).

13. Name a book that you would love to see as a movie.

I’ve got a shortlist, but here goes:

Can you tell I’ve got a thing for fantasy?

Have you ever participated in a tag? What are your thoughts on book adaptations? Let me know in the comments! I promise the Fantasia review will be up by next week, see you then!