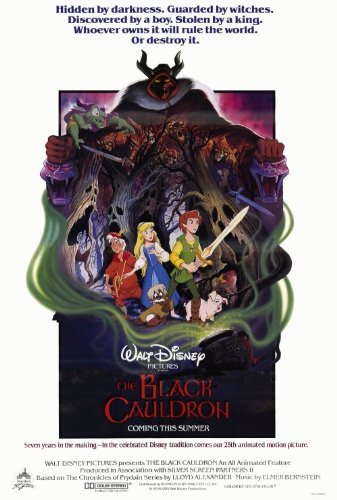 Of all the animated Disney films out there, few have had a history as troubled or as fascinating as The Black Cauldron. Shaped less by the average process of transforming a novel to film and more by the decade, regime, mindset towards animation and internal struggle of power of the studio that made it, The Black Cauldron is considered the black sheep of the canon; those who worked on it have few fond memories of the experience, and the result of all that blood, sweat, tears, and voodoo curses hurled in Jeffrey Katzenberg’s direction is an odd creature Disney is content to let wallow in relative obscurity. To this day it’s looked down upon by all but a few loyal fans who’ve elevated it to semi-cult status. The story of how and why this is is worth a documentary of its own.

As for my thoughts on the film itself…well…

I honestly can’t talk about my feelings towards The Black Cauldron without putting it into some context first. And there’s a LOT of context that needs to be explained. Hence why I’ve decided to split this review into two parts. This first half will go over the history of the movie and behind the scenes shenanigans, while Part 2, which is the review I know you’ve been anticipating, will be released next week. So if you want to avoid an engaging history lesson that discusses the climate in which The Black Cauldron was created in depth and go right to the film itself, I suggest you return at a later date. Or go watch Waking Sleeping Beauty. It’s a fascinating, personal look into the struggle that shaped Disney’s Renaissance era and they devote a good chunk of the beginning into what went down during the making of The Black Cauldron.