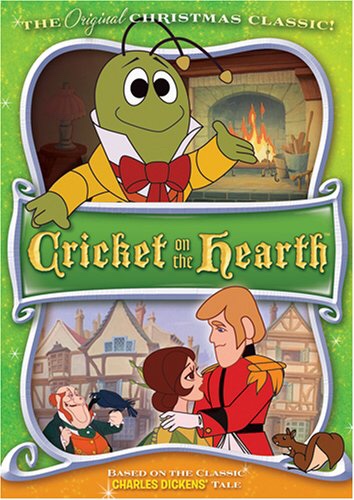 Ladies and gentlemen, I have found it.

The lowest of the low.

Call it a hunch, but I think Charles Dickens really had a thing for Christmas. His most popular novel has the holiday in the title and has been adapted for the screen and stage at least over 200 times. Dickens set a few other tales at Christmastime, no doubt to recapture the magic and spirit of the holiday in the same way A Christmas Carol did, but those were met with less success. Does anyone here remember that classic “The Haunted Man”? That one was a ghost story that also took place at Christmas. Where are the hundreds of versions of that tale? Or “The Chimes” for that matter? Or “The Battle of Life”?

Then there’s today’s tale, “Cricket On the Hearth”, which only received two silent film adaptations (the first directed by D.W. Griffith) and a long-forgotten stage play. For yet-to-be-fathomed reasons, Rankin-Bass deemed it the perfect material to follow up their smash hit Rudolph three years prior. Instead of stop-motion animation, however, we get hand-drawn animation. While that would normally be a plus in my book, I’m not kidding when I say this is some of the cheapest, most unpleasant animation I’ve set my eyes on. It’s heavily recycled, the character designs are unappealing, and it cheats numerous times by just showing long periods of still images with nothing happening. I also had to be careful grabbing screenshots because the far-right side of the video flickered and was several frames off for some reason. And it wasn’t a corrupted file issue either, this is straight from the dvd. They aired this special on national television, how could they not be bothered to fix that?

And those are just the issues I have with the visuals.

The characters are one-dimensional tools, the songs are at best forgettable and at worst unbearable, and the story manages to be both devastatingly bleak and disgustingly saccharine while also insulting to its audience. Now, Charles Dickens was a talented writer knew how to properly mix those elements to tell a compelling and resonant story. In his Christmas tales, the sentimentality and darkness complement each other and ring true.

But guess who did such a bang-up job encumbering a song about ableist reindeer with a meandering hour-long plot that he was given free rein over the story?

Romeo, Romeo, wherefore art thou, Romeo? Deny thy special and refuse thy Writer’s Guild card. Or if not, throw thyself into the roaring cauldron of the sea and let the sirens peck at thy swollen flesh…sexist pig.

Well, this preamble has gone on long enough. Grab your insect repellent, folks, let’s look at Cricket On The Hearth.