“You’ll be safe up in the tower, Rapunzel. No man can ever touch you.” “But I don’t want to be safe. I want to be free!”
– Our villainess and heroine lay out the theme in the middle of a mother-daughter argument

Ah, back to fairy tales. Hopefully it won’t be anything as nightmarish as Meets Frankenstein.

I won’t beat around the bush, this episode is pretty infamous for having some freaky imagery that’s forever burned into the nightmares of kids who’ve watched it. I may have been spared from it in my childhood, but watching it through the eyes of a fully-grown adult doesn’t make it any less disturbing (and that’s before we get to the horrifying realistic show of physical and psychological abuse the titular character endures at the hands of her “mother”). Rapunzel is a fucked-up episode – and kind of a fucked-up story when you stop and think about it.

This wasn’t my favorite fairytale to begin with but I see the appeal in it; a woman with impossibly long, beautiful hair rescued by a dashing prince after being held prisoner by an evil overbearing parental figure oozes classic storybook romance. It wasn’t until I saw Into The Woods for the first time that it really gave me pause. The first act of the show ends with everyone celebrating their hard-earned happily ever after, only for it to come crashing down in the second act as the consequences of their actions catch up to them. Rapunzel is no exception, even though she’s the most innocent character throughout all this. She’s out in a world she’s never known with no social skills, family, friends, or any idea how to cope with change; she’s clearly showing signs of post-partum depression, the prince who fathered her children and got her banished from her home in the first place brushes her off as a nuisance and joins his odious brother in ogling other women, and when she confronts her mother for abusing her all her life, the woman tries to justify her actions and drives her under the feet of an angry giant. All I’m saying is thank God for Tangled rewriting the story to give the main character a chance to actually affect things in her own story and create her happy ending; hell, thank God for the Barbie version of Rapunzel doing that as well – both of them!

Anyway, tales of beautiful women trapped in towers go back as far as ancient Greece with Danaë, mother of Perseus, locked up by her dad so she wouldn’t get knocked up. There’s also the Persian myth of Rudāba, whose lover climbed her hair (sound familiar?) and even the myth of St. Barbara, whose father shut her in a tower to stop her from marrying beneath her station. The earliest version of the Rapunzel story we know, however, comes 178 years before the Brothers Grimm penned their take on it. In “Petrosinella”, a Neopolitan folktale collected by Italian author Giambattista Basile, a mother sells out her daughter (the titular character) to an ogress to save her own life after she’s caught stealing her parsley. Petrosinella is seven years old when she’s taken away from her mother and locked in a tower as opposed to being raised from birth by her captor. The usual bit with the prince showing up and falling in love happens, but this time they make their escape using magical means she picked up from the ogress, ultimately defeating her to earn their happily ever after. This tale was later retold in France as “Persinette”, then ambled on over to Germany in Friedrich Schulz’s fairy tale collection, before finally being picked up and rewritten into the Rapunzel story we know today by Jacob and Wilhelm Grimm.

If there’s a running theme throughout all of them, it’s the futility of trying to keep girls from reaching the inevitable – no, not men, womanhood. The tower is the means in which the parental figures try to keep their daughters innocent and childlike forever instead of letting them flourish and learn out in the world. It never works, obviously, since knowledge and arguably temptation comes in the form of the prince. Whoever’s holding Rapunzel prisoner, be it witch or ogre, is furious that their daughter is “tainted” by the outside world and “ungrateful” for all that they have given her to keep her happy (barring the one thing she does want, real freedom). It’s an ugly but honest reflection of how society views girls through the Madonna-Whore dichotomy; if they can’t be sweet and pure forever, then they’re sullied and to blame for the mishaps they face when trying to grow up, things they should have been able to endure if the parents in question had helped them to understand instead of smothering them out of their own selfishness. Rapunzel does get her wish for freedom, but at the cost of being cast out of her childhood home – it was an entrapment, yes, but also the only world she’s ever known up until then. Ultimately the power of love comes through because fairy tales (at least in anything that isn’t Into The Woods).

So knowing all this, how well does Faerie Tale Theatre tell the story of Rapunzel?

Well, you already read this far…

END_OF_DOCUMENT_TOKEN_TO_BE_REPLACED

Once upon a time in the faraway land of Malta, an actress named Shelley Duvall starred in a little movie called Popeye. A blithe innocent spirit, Ms. Duvall kept herself entertained with a charming book of fairy tales in between shooting. Duvall recounted the story of The Frog Prince to her costar, Robin Williams, who found the tale humorous enough to his liking. From there, an idea sprung that would stay with many a child of the 80s and 90s.

From 1982 to 1987, Duvall produced and hosted Faerie Tale Theatre, a 27-episode long anthology series on Showtime. She convinced many of the biggest stars of the time to play the roles and even a few well-known auteurs to direct using her clout and gregarious charm. Duvall herself would star in seven of the episodes as well. This show, along with HBO’s Fraggle Rock, proved to be one of the first successful examples of cable programming and cemented itself as a cult classic. My own experience with Faerie Tale Theatre stems from renting episodes on VHS from my library at a very young age. Back in the day, if you really wanted to know what you were in for, then you could turn to the VHS cover. Yes, we’re all familiar with the old adage about not judging a book et cetera, but there’s an art to home media releases that’s tragically all but lost. The VHS tapes of Faerie Tale Theatre had a specifically crafted painting made for each episode done in a famous art style that the episode itself replicated in its set and costume design. Apart from giving you an idea about the content on the tape, it was just pretty to look at. Tell me, which is the more inviting, this – 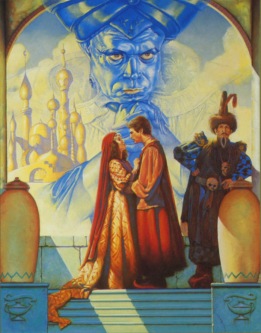 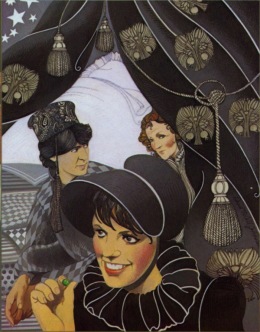 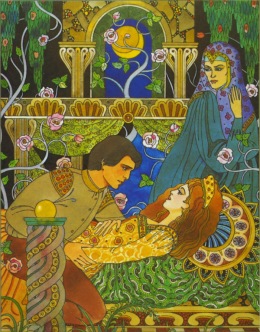 After a lengthy time gap, I rediscovered the entire series on Youtube and watched with fascination. While many of the effects and the over-reliance on green screen certainly dates it, there’s a nostalgic charm that’s far from a deal-breaker. This was well before Disney began building upon and later deconstructing classic fairy tales with the Renaissance and Revival periods of animation, meaning the stories are told completely straight with just the bare amount of changes needed to fill an hour runtime. Seeing a score of well-known actors in fantasy costumes playing to the cheap seats can make you feel like you’re watching a pantomime, but there’s hardly a moment where it seems like they’re doing it just for the paycheck. Everyone involved looks like they’re in on the idea of putting on an entertaining show. Some performances remind us how excellent some of the actors are at their craft, others show sides to their talent that were rarely seen – though for the most part, there’s plenty of ham to go around, ham smothered in heaps of delicious cheese.

So I’ll be going through every episode in order, providing a ranking, a little bit of the stories’ history, why they were changed, and how they hold up compared to other versions. I won’t be classifying the reviews season by season as the amount of episodes in each one is erratic, with some having as many as six or as few as two. Despite their being only twenty-six of them (plus one reunion episode), there’s going to be a lot to unpack.

See you tomorrow when I review the first entry in this series, The Tale of the Frog Prince.

¡Buenos Dias! I just got home from my family trip to Argentina and boy do I have a lot to unpack (literally):