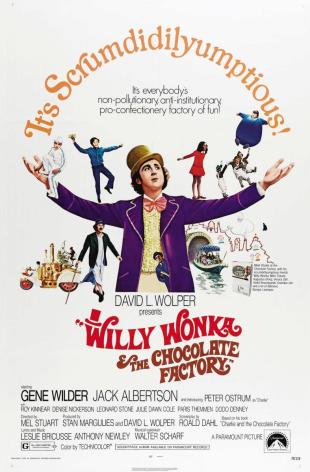 “Come with me, and we’ll be, in a world of pure imagination…”

Is it just me, or have we been losing a lot of good people this year? I thought the Beloved Celebrity Death Plagues of ’09 and ’15 were bad, but less than a few weeks after we rang in the new year it’s like 2016 looked at the entertainment world and said “Wait ’til you get a load of me!” Sad to say it’s also one of the reasons why I’m looking at this beloved classic from many a childhood this month rather than something leaning towards the horror genre  – not that I’m complaining about it, I adore this movie as much as anyone, even more so now that the man who brought the titular character to life is sadly no longer with us. Of course, if you’re one of those people who found themselves, oh, traumatized by Willy Wonka and the Chocolate Factory in their youth (a feeling which I too am familiar with when it comes to this movie), then this might be right up your alley.

But first, let’s talk about the man who brought us the story of Willy Wonka in the first place, Roald Dahl. You might remember his name popping up in my review of Chitty Chitty Bang Bang. Dahl wrote the screenplay for that movie and as silly and nonsensical as it is, even for a ’60s family musical, it’s got his trademark blur between whimsy and darkness all over it. Dahl is most famous for his children’s books, stories like “Matilda”, “The BFG”, “The Witches”, “The Twits”, “Danny Champion of the World”, and those are just the ones I can name off the top of my head. His tales often feature children as protagonists persevering through kindness, bravery and wits against foolish adults in a world that’s dark and scary, usually mixing in a naughty sense of humor for good measure. He’s mostly been compared to the Brothers Grimm in that regard, though unlike Jacob and Wilhelm he never went back and re-edited his own stories for being too dark. He knew how bleak the world could be, especially for kids who have to put up with seemingly pointless rules and the cruel people who administer them, and though he added a lot of silly rhymes and fantastical characters in the mix, he did not sugarcoat these harsh truths. Despite the umbrage you’d expect from parents and educational figures, his stories still remain some the most popular ever written for young audiences. Heck, even I still pick them up every once in a while. Appropriately, this year marks his 100th birthday, and I’m happy to say much of the literary world celebrated his legacy. Of course, his story that’s most recognized to this day, especially thanks to this movie, is “Charlie and the Chocolate Factory”.

Now I know what you’re thinking. I mean “Willy Wonka”, right? His name is in the title of the movie after all. If that’s what is going through your mind then it’s time to segueway into the history part of the review. You see, the reason this movie was made in the first place was due to good old fashioned corporate American capitalism. Warner Brothers made a deal with Quaker Oats for them to create their own brand of chocolate Wonka bars and renamed the movie from Charlie to Willy Wonka to promote sales (and not because Charlie was a slur during the Vietnam War like most people believe). It didn’t help either of them in the long run as the movie didn’t do well financially and the bars melted at room temperature, resulting in a very short shelf life for both. Even though Roald Dahl penned the script for the film, much of what he wrote wasn’t used and his ideas for who should play his famous candymaker were ignored. He hated it as a result and has retained that outlook on most adaptations of his work up until his death, the one exception being the animated version of The BFG.

Willy Wonka did find a second life on tv airings and on home video, and over time has become as nearly as big a classic as The Wizard of Oz. In fact, my introduction to Willy Wonka was the first VHS release for its 25th anniversary. My younger cousin (the same one whose birthday party was my introduction to The Nightmare Before Christmas) showed it to me and I enjoyed it almost as much as he did, though we both hid in his bedroom during…that scene. Then I went through the same motions I did with several childhood favorites growing up: becoming cynical, pointing out the plotholes and making fun of it, trying act cool over…that scene while I was freaking out on the inside, all of this not helped after getting around to reading the book it was based on and finding it better especially because it didn’t have…THAT SCENE. I hoped someday a more faithful adaptation would be made, and I was both overjoyed and envious when it was announced Tim Burton would be directing a new take on the tale (envious because I hoped I’d be the one doing it, but hey, never say never).

Now I’m probably going to lose all credibility on this next statement, but I have to come out with it in order to move forward.

When I saw Tim Burton’s Charlie and the Chocolate Factory in 2005, I liked it.

Huh, that’s funny. I thought the angry mob would have show up to kick my ass. 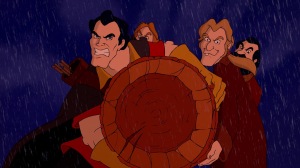 I said, liked, LIKED! Emphasis on past tense! Can I at least continue my explanation before I get hung in town square for all to see?

“Mmmmmm…ok. We’re an angry mob, but we’re not unreasonable.”

Coming from a semi-cynical teenager teetering on the edge of becoming a Goth and adoring anything by Tim Burton, I thought the movie was a superior adaptation at the time, removing the camp, cheese and nightmare fuel while being much more faithful to the book. It managed to gain quite a following with people who felt the same way. Even Roald Dahl’s own daughter admitted he would have loved it. Over time, however, I noticed it didn’t hold up as well as my initial viewing. I had yet to learn that in adapting written works for film some changes have to be made to better fit the medium and build an emotional connection to the characters. “Charlie” was faithful in some ways, but made unnecessary additions in other places. Some of the child actors aren’t all that great and scenes that were meant to be funny in the original movie don’t come across that way in the newer one. And Johnny Depp…well, he’s being Johnny Depp. Just because it worked for Pirates of the Caribbean doesn’t mean it will work anywhere else. I still consider it a decent movie and the hate for it pretty overblown, but after giving the classic Willy Wonka another chance some years later, I have to say the 1971 version is the better version, and I will now present my case as to why.