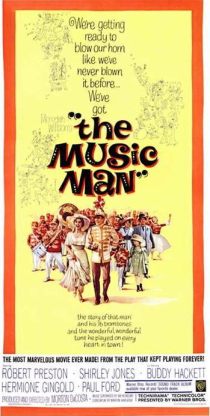 “Please observe me if you will, I’m Professor Harold Hill,
And I’m here to organize the River City’s Boy’s Band!”

Let’s close out the summer with what I consider a must-watch summer musical. Doesn’t hurt that the main action kicks off on the Fourth of July.

“Missing another appropriate holiday-themed movie by several months. Ah, it’s good to be back.”

Based on the stories and childhood of Meredith Wilson, The Music Man weaves a tale of small town turn-of-the-century America, marching bands, charming charlatans, and the power of music that brings them all together. The original stage production notoriously beat West Side Story for Best Musical at the Tony Awards, though Tony and Maria got the last laugh when it came to the Oscars. I contend however that 1962’s The Music Man is a prime example of how to do a stage-to-screen adaptation. Through a combination of top-notch talent, music, staging, and witty witticisms it’s one of the crowning jewels of the Golden Age of Hollywood Musicals that lasted through the 60’s. Fifty years later its impact is still felt, at least musically. Chances are if you ambled down Main Street USA in any of the Disney parks you’ve heard the melodies of “Iowa Stubborn”, “Lida Rose”, “The Wells Fargo Wagon”, and “76 Trombones” playing in the background. It’s a staple for community theaters across the country. And like Chitty Chitty Bang Bang and The Sound of Music, it’s one of Seth MacFarlane’s most beloved and referenced musicals.